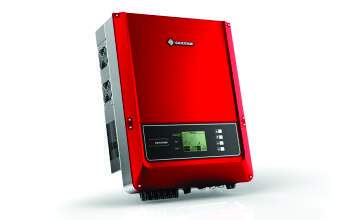 GoodWe was established in the year 2010, since then their focus towards team building and research and development was commendable. In 2012, the GW4000-SS inverter awarded the double A PHOTON test ranking the top three in the world. This was just one of their many achievements.

GOODWE specialised in PV inverters and other electronic components for the generation and storage of renewable energy.

GooDWe solar inverters are electrical converters that transform direct current (DC) output to alternating current (AC), which can then be fed into a power grid. MPPT technologies, applications, and hardware are all guaranteed to extend the life of the device.

The inverter system is intended to transform solar energy into electrical energy for household loads via inverters. A solar power inverter or solar inverter system is a cost-effective solution because it saves money for the customers. GooDWe solar inverters are used in residential rooftops, industrial arrays, and energy storage systems. GooDWe inverter is a leading manufacturer of top solar inverters that use cutting-edge technologies in solar photovoltaic power conversion and are suitable for newly-built housing projects or limited domestic installations.

We encourage the use of renewable energy sources through the use of inverters, assisting in the elimination of the greenhouse effect and global warming so that nature is protected from its impacts. The GooDWe inverter price list is dependent on its form, and while it can seem to be a wide variety when choosing to buy one, the truth is that the larger the Inverter you choose, the lower the price. GooDWe inverter for home employs cutting-edge photovoltaic technology. Higher conversion efficiency and lower energy losses are guaranteed to increase consumer loyalty.

Revolutionary Solar, ensures that the best quality commodity is delivered, resulting in a positive consumer experience. We also focused our efforts on developing and selling a wide variety of solar inverters, solar panels, and solar power systems. Our goal is to provide value to our consumers by providing the highest-quality goods at reasonable prices. We aspire to offer the best quality product and service to our consumers while still adhering to their specifications. We strive for quality enhancement so that our customers receive their orders on schedule, in full, and exactly as they requested.